Another Friday in the Greenhouse


For those of you in the Kansas City area, please join us next Friday night for out fourth annual "Friday Night at the Greenhouse' event. Like last year, we will be at the Suburban Lawn and Garden location at 105thst and Roe Avenue. 10% of all purchases made between 5pm and 8pm will be donated to FLHW.
We hope to see you then!! 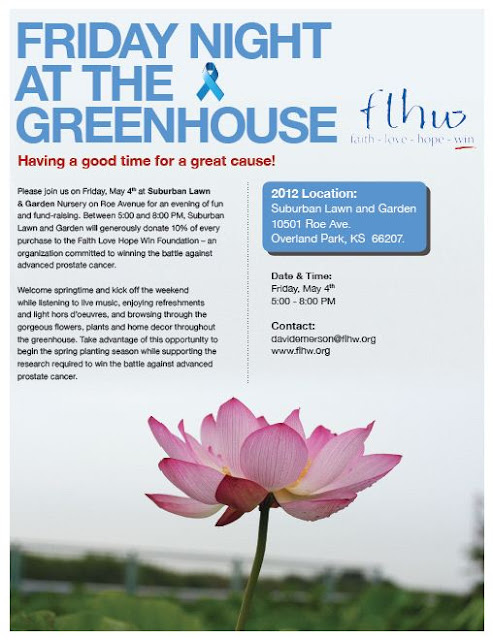 It was last Friday, very early in the morning (1:15am) and it was my fourth day in the hospital. I obviously could not sleep. Though the staff on the Oncology/Hematology floor was great, the constant blood drawls and vital sign checks were driving me crazy and making sleep nearly impossible. I needed to be home.

Earlier in the week I had a stent placed in each kidney in order to deal with blockage and allow urine to drain from my body. I had experienced acute kidney injury. It was dangerous and a very scary experience for me, as well as the family. After the kidneys were drained, the surgeon attached tubes to my kidneys and put 2 holes in my back to allow the tubes to come through and attach to bags to capture urine. The good news is that it appears my kidneys are recovering and the marker for kidney function is back in the normal range. We met with Dr. Van yesterday and he was pleased with my progress. We scheduled an appointment for an outpatient surgical procedure on Thursday to have the tubes internalized so that they will allow the urine to flow from my kidneys directly to my bladder, which will allow me to urinate normally. We are relieved that the bags are just temporary. The blockage due to cancerous tumors will not allow normal drainage. The tubes will have to be replaced every 3 to 4 months, which will also be done on an outpatient basis.

After being released and returning home on Friday, the worst part has been getting the pain under control. By Sunday at noon the dosages of both Oxycontin and Oxycodone were not keeping up. My pain and discomfort was increasing. Mary made a phone call to the doctor's after hours number. The doses of my pain meds were immediately doubled and Prednisone was added. After a few painful hours, I felt much better. I even ate a rather larger dinner (for my standards)  Sunday evening. I told Mary I enjoyed the meal more than I have in the last three months. Another positive note to report is that I have gained a little weight over the last week.

What lies ahead for the cancer treatment is another unknown. We have our monthly appointment with Dr. V on Monday (April 23rd) and will discuss treatment options and start to make a game plan.

Thank you to everyone who has been praying for us and sending us so much positive energy.
Posted by Unknown at 10:38 AM 15 comments

There's a song, Mad World by Gary Jules, I believe it's a re-recording of an old Tears for Fears song. I find it to be a heart wrenching song, but it also is a song that I enjoy dearly. There are a few lines that touch far to close to home:

There are aspects of my life right now that are perfection, little bits that I cherish. A lot of the rest is just chaotic and frankly tiresome. It will get better, I have faith that it will happen.
Posted by Unknown at 9:14 AM 3 comments

After stopping the XL 184 back on the 1st of April, we were expecting some positive changes. By last weekend, I did start seeing changes, but not so positive.

Friday night into Saturday morning, I began to experience mild pain in both femurs and in several areas of my back. Sunday morning I experienced several episodes of vomiting for the first time. It happened later that day again and both Monday and yesterday morning as well.

A call to Boston didn't lead to much insight into my potential situation, as Mary was told that most people start feeling back to their normal selves after a few days of stopping the trial drug.

By Monday afternoon Mary called my local oncologist in Kansas City to alert him of her concerns with my deteriorating condition. The big concerns were pain, limited and liquid only diet for several days, my increased weakness and the onset of dehydration.

Yesterday (Tuesday) I was at the KU Cancer Center by 8:15 AM and then admitted the the hospital itself by 1:00 PM. With a catheter in place and many,many liters of saline solution the concern is no urine is being passed. Additionally, the marker for my kidney function is 4 times higher than it should be and increasing.

This morning we will find out the outcome of all the tests and scans that have been taken.

Looks like I'm here for a few days, but my spirits are high and we will get through this, as we have before.
Posted by Unknown at 6:46 AM 11 comments

I always knew there would be an end to my current treatment, there is no cure after all. I knew it would only last so long. Like each of the proceeding treatments, this one was just me scuffling with the enviable, time.

My appetite had gotten so bad last week that we called the nurse in Boston on Monday morning. After consulting with the doctor, she called back and told me to stop taking the drug (XL-184). We don't know how quickly the side effects will subside, but we are hoping soon, so that I can get my strength back and resume some semblance of normalcy.

Mary and I will be going to Boston in the next several weeks. I will have scans done once again and then we will meet with our doctor. Item one on the agenda will be to determine our options - should we change the dosage to a lower amount, or what is next? There is a newer trial of XL-184 at 40mg (I'm still at 50mg), but I believe the way the trials work, to adjust to the 40 mg I would have to quit the existing trial I'm in and and qualify for the newer trial. If the new trial has an exclusion criteria for previous XL 184 patients, then I would not qualify and must pursue other options.

Once we determine the next treatment, I'll share the details. Since I was diagnosed with advanced prostate cancer, we have worked to support the research to find improved treatments and ultimately a cure for this dreadful disease. We are living proof of this need. For now, me move on with our heads held high and prayers on our lips and in our hearts.
Posted by Unknown at 8:47 PM 6 comments

I had mentioned John A. here briefly over the last few months. On March 25th the disease finally got the best of him.

He leaves a huge hole in the on-line community and will be greatly missed. He continued to guide us and provide inspiration as he and his wife Jeanne continued to share their experience through the last weeks and days of his journey on earth.

There were a number of tributes and things written about John, I believe my friend Joel did an exemplary job: http://advancedprostatecancer.net/?p=3135

I have no other words to add other than I really hate this disease.

To John:
Hail Mary, full of grace.
Our Lord is with thee.
Blessed art thou among women,
and blessed is the fruit of thy womb,
Jesus.
Holy Mary, Mother of God,
pray for us sinners,
now and at the hour of our death.
Amen.
Posted by Unknown at 4:33 PM 0 comments

As you might be able to tell from this picture the trial medication is taking its toll on me.

My hair has pretty much turned white all over but more concerning is my weigh. Over the past two weeks my appetite has gotten worse and that is reflected in the additional 6 pounds I have lost (30 in total).

We spoke to the dietician at KU Cancer Center last Monday and she provided several ideas that we are trying but I fear it may not be enough.

We will continue to work on it with every meal but it's becoming really difficult for me to eat. Though I return to Boston in a few weeks, we might be talking to them on the phone even sooner. 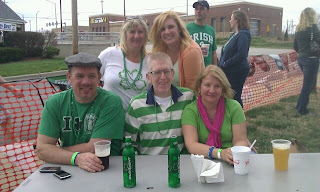