It's my PSA, up to 39.97 (from 31.18)
What the hell?
Yesterday's post was 100% dead on regarding my feeling better than I have in weeks, so where does this come from?
Dr. V tried to put a positive spin on it "... it's only one data point, PSA can go up and down.." blah, blah, etc.
I appreciate his comments, but as you know, we were looking for it to go in the other direction, looking for the downward trend to continue.
So we just keep on keeping on; I am minutes away from Chemo # 9 (of 12). Two treatments from now, when we come in on January 5th, we will make, or come close to making a decision about what will be the next treatment after we have completed this regimen.  The likely choice will be DES. DES is an oral pill taken once daily. It is basically women's estrogen.
Before beginning DES I will have to have one treatment of radiation across my breast bone. This is to help alleviate one of the potential side effects, breast enlargement.
Yeah, that's right, it just keeps getting better and better!
Before making this decision, we obviously have a little research to do. There are a few other clinical trials we might consider, including Provenge.
It's all so crazy, unpredictable; I feel great, my bone scan was stable but......
A MUSIC UPDATE: I haven't included any musical suggestions in quite some time.
Last night I downloaded Darius Rucker's new album. If you don't recognize the name, he is/was the front man for "Hootie and the Blowfish". Well it seems Darius went a little country! I just listened to it in the lobby, it's really good. His strong voice come through loud clear all without too much 'twang'! It's a keeper, I give it two thumbs up!
Posted by Unknown at 11:56 AM 2 comments

Tomorrow, about twelve hours from now, I will be in the midst of chemotherapy treatment number nine.  I'm feeling a bit indifferent tonight; I feel great and in fact, overall I feel better than I have in sometime. Not that I have been feeling bad, it's just I feel really good right now.

Taking advantage of weather in the 50's today we played disc golf this morning (welcome back Pete, I really missed you).  Upon my return home I took advantage of the nice temperatures and my high energy level and proceeded to put up our outside Christmas lights. It only took me a few hours and I am glad that this chore is behind me. Next weekend we can focus on the inside decorations. That is, depending on the side effects from "old #9"!

I find it hard to believe that tomorrow I will be 3/4 of the way through this process. I want better results, a lower PSA number, and more, but I am a realist at the same time, and things are going extremely well.  I shouldn't be greedy but I should thank God for what has happened so far in this process.

I probably say this to often but I live this terribly ironic life; I try my best to go on day after day with my head up, trying to remain positive, trying to laugh and live. All the while I carry this unbelievable burden called cancer. Not a cancer that can come, and begone in short order, but a cancer that goes on and on, unknown to most. There is nothing in my outward appearance that would even let anyone know what a cruel war is waging inside of me.

I am and will remain the commander, the General of this war - I will not be defeated without a fight. Fortunately, even after four years, the battle has just gotten underway.
Posted by Unknown at 9:04 PM 1 comments

I saw this quote and because it's so appropriate, I thought I'd pass it along.

Life is not the way it's supposed to be.
It's the way that it is.
The way you cope with it,
is what makes the difference.
Played disc golf this morning, 28 degrees when I left the house, but it was 45 degrees when we finished at 10:30.

Monday is treatment #9, more thoughts on that over the weekend!
Posted by Unknown at 9:21 AM 1 comments

Another successful year for FLHW

As many of you know, one of the first things I did after being diagnosed with advanced pc was to establish a non-profit foundation, the Faith - Love - Hope - Win Foundation. The simple mission of this foundation is to raise awareness of the importance of testing and early detection and to raise money to fund the research required to develop improved treatments and ultimately, a cure. In just three and a half years we have donated over $100,000 to the Prostate Cancer Foundation. Here is a recent message that we sent to some of our supporters:

On behalf of the Board of the Faith - Love - Hope - Win Foundation, we would like to personally thank you for your participation and support of the 2008 FLHW golf tournament.

This year's event was a great success; a success that would not have been realized without your generosity. We were blessed with a beautiful day, a full field of golfers, and an exceptional group of volunteers.

The result of this year's event is a $32,000 donation to the Prostate Cancer Foundation (PCF). This donation will be doubled through a matching program at PCF. Furthermore, these funds will be dedicated to support research for improved treatments and a cure for advanced prostate cancer.

It is through your participation, coupled with the support of all of our sponsors, participants, and volunteers that we have, in just four short years, cumulatively donated over $100,000 to PCF for advanced prostate cancer research.
­
The research that our donation supports is what gives us hope that a cure will be discovered in our lifetime. Thank you for sharing in our hope.

Mark your calendar now for the 2009 FLHW Tournament which is scheduled for Friday, September 25th at Ironhorse Golf Course. We look forward to seeing you there!

I extend this message of thanks to all who have supported our mission through the years!
2008 was our most successful year so far:
2008 Ice Bowl
February Poker
2008 FLHW Disc Golf Tournament
2008 FLHW Golf Tournament
December 1st - Texas Hold 'em
Posted by Unknown at 9:50 AM 0 comments

I ran across the following poem by a 'cowboy poet', Robert Service.

It was part of a notice posted to one on the on-line boards I monitor regarding the death of another one of my brethren. I did not know the man, nor did I recognize his name but after reading this, his favorite poem, we were linked by more than PCa.

When you're lost in the Wild, and you're scared as a child,
And Death looks you bang in the eye,
And you're sore as a boil, it's according to Hoyle
To cock your revolver and.....die.
But the Code of a Man says: "Fight all you can,"
And self-dissolution is barred.
In hunger and woe, oh, it's easy to blow...
It's the hell-served-for-breakfast that's hard.

"You're sick of the game!" Well, now, that's a shame.
You're young and you're brave and you're bright.
"You've had a raw deal!" I know - but don't squeal,
Buck up, do your damnedest, and fight.
It's the plugging away that will win you the day,!
So don't be a piker, old pard!
Just draw on your grit; it's so easy to quit:
It's keeping-your-chin-up that's hard.

It's easy to cry that you're beaten - and die;
It's easy to crawfish and crawl;
But to fight and to fight when hope's out of sight-
Why, that's the best game of them all!
and though you come out of each gruelling bout,
All broken and beaten and scarred,
Just have one more try - it's dead easy to die,
It's the keeping-on-living that's hard.
Posted by Unknown at 9:50 AM 1 comments

OK, so you lovers of Fall, now what?

The leaves have all fallen and the gloominess of Fall/Winter has arrived in Kansas City
like a Mac truck! It was in the seventies last week, and now it's been rainy for two days and
the temperatures are hovering around 40! Bah humbug!!
It looks like this weekend disc golf will make it's annual return to the course in the woods, or "Down Under' as it is called. Ignoring the comments of my first paragraph, I love it! I'll snap a few photo's and include in an upcoming post.
~~~~~~~~~~~~~~~~~~~~~
Mary just called with the results of yesterday's blood test and bone scan.
Bone scan results - good news, no changes from the end of August!!
Blood Test - stay away from me! White and red blood cell counts now at an all time low!!!
Posted by Unknown at 2:30 PM 1 comments

The good news is my PSA is down another 10% to 31.18
I was hoping to drop into the twenties but I am not complaining!!
Of course that was followed up by another night of no sleep. I woke up at 12:45 after less than two hours of restless sleep. I didn't fall back asleep until after 4:30 so I started the morning on just three hours of sleep.
I did watch a few more episodes of Dexter (again, very twisted) and I watched Ironman, loved it!
Until next time!
Posted by Unknown at 8:46 AM 5 comments 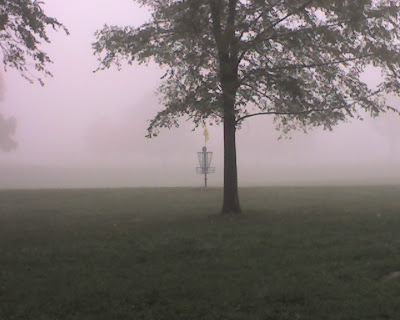 The title is just me kidding, I was going to add a joke about my mind being in a fog after tomorrow, but I'll spare you.

I had to share this picture from Saturday morning's round disc golf. (click the photo for a larger view) It was around 55 degrees yesterday, shorts, long sleeve t-shirt and a light pull over. When we arrived at the first hole, we could only see about 50 feet in front of us. We encountered the same on hole two. The fog slightly lifted for holes 4-8 but #9 was a blind shot as well. My drive on #9 disappeared into the fog and we found it 320 feet later, under the basket!

The picture above is hole #11. The tee shot and the fairway are covered by trees, thus keeping the fog at bay. However, as we approached the basket this was the scene.

Needless to say, it was fantastic Saturday morning!
Posted by Unknown at 6:43 PM 0 comments