What a Beautiful Ride

Sometimes I run across music that captures my mood, my mood in another time.
Right now, I'm feeling great; no back tinges, my hips are allowing me to ride the exercise bike 2-3 times a week for 15 minutes and playing disc golf is as good as it's been in a long time!

So today, I was at work reviewing technical documents, listening to my iPod when I ran across the song below. It's by country western artist Gary Allan. I was given a copy from my brother during a visit to St. Louis in July. I've listened to it a number of times, but today it meant a little more.

I'm at one of those 'top of the roller coaster' ride moments, things are going well, even with a Dr. appointment next Tuesday.....

Life ain't always beautiful
Sometimes it's just plain hard
Life can knock you down, it can break your heart

And I wish for just one minute
I could see your pretty face
Guess I can dream, but life don’t work that way

The laughter of a child

Yesterday at Mass I was emotionally stopped in my tracks. There is a three year old little boy, who has cancer. I believe radiation and chemotherapy.

Yesterday was the first day I had seen him since I learned of his diagnosis. He had "the look"; no hair, scars from apparent surgeries, etc. These medical procedures however had no apparent impact on him yesterday. Here was this child, playing kissy face with his mother, happy, content and smiling. He was oblivious, at least at that point in time, of the disease that afflicts him. In fact, there was an essence of joy and contentment about it. I cried for him then, I cry now.

In my silent prayers at Mass I told God I'd trade places with him. Forty-four years may not be a long enough time to live, but three certainly is not.

And so, as I look ahead, I have to remember that moment and use it for strength during the tough times.

Below is a message posted on one of the message boards I monitor. It is from the daughter of a terminally ill man in April 1996. His comments are in quotes. Pay attention to the first sentence of his quote. This is what I have been trying to say for a long time.
~~~~~~~~~~~~~~~~~~~~~~~~~~~~~~~
I want to follow the thread on the endgame a little. My dad, age 76, is at the endgame after first diagnosis with Pca in 1988. The disease is hormone refractory and he has suffered a pathological break of the pelvis from the cancer. He is currently on no medication and actually says he is not in as much pain since the break as before. His PSA when last reported several months ago was greater than 900.

His response to the broken hip was to get out the walker we had earlier for my grandmother and rig it up with a bicycle basket. Initially this allowed him to help my mother around the house by setting the table, etc. When I've spoken to him by telephone the past few weeks, he tells me of how he has been out with his walker, a bucket of grass seed balanced in the basket and that he has been sowing the lawn. Last week, with his walker, he was out fertilizing azaleas that he will probably not see bloom again. His spirit amazes and comforts me. He wrote the following recently--and perhaps he can go more gently into that good night than one who is younger and who has young children of his own:

"Sudden, unexpected death simply terminates one's life, but death on the horizon takes on meaning; it forces one to try to wrap up one's life and bring it to a fuller and richer completion. My pending death, although frightening, especially when first confronted, has become an important part of my life. It keeps my life in clearer focus. Every day becomes more precious and I hope more fully lived.

My consciousness has been raised and my love deepened; the world has taken on a new splendor. While all of this makes life more attractive and whets my appetite for more time, it makes death a source of meaning that redeems it somewhat."

Of course the devil is in the dying and the wrenching and tearing of the lives closely woven with one's own. It is my hope that all the suffering involved in and occasioned by my death will be turned to some good -- that, for all of us involved, our sense of values will be clarified and our humanity will be purified and shine more brightly as we embrace and strengthen each other... There are blessings to be found even in dying and the loss of a loved one, if we are open to them..."
Posted by Unknown at 9:41 AM 3 comments

The dance of the dragonflies

We spent last weekend at my brother's property in central Missouri. It's 150 acres of paradise.

I mowed grass again like last summer. I find it very therapeutic. We rode four wheelers/ATV's and ate real well. We enjoyed each other's company and simply 'getting away'.

Brad got to drive the four wheeler. At first he rode with me on the back, then a few trips around the house on his own. He absolutely loves it up there. In fact, I think he would go every weekend if we could.

Doug has a wildlife camera setup on one of the trails. It uses infra-red to track a heat source and then captures two pictures at a time. It had been in place for a few weeks so he was anxious to see what might have been captured. As we reviewed these on my laptop he was a little disappointed. Then, as we had almost finished looking at them, this appeared on the screen! Bambi's Papa is right!!! 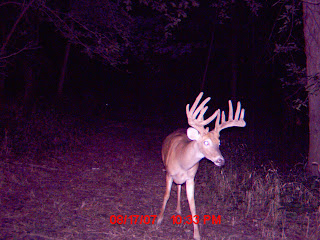 Saturday evening we sat out back after dinner and talked. At one point there were eight to ten dragonflies dancing around our heads. Not bothering us, just staying close, dancing in the light of the dusk. It was very inspiring, something I will remember for a long, long time.
Sometimes, it really is the simple things.......
Posted by Unknown at 3:22 PM 1 comments

A summer breeze,
traverses the sycamore leaves,
they strike up their song,
on a harsh, dry day.

The mid-summer sun,
burns with intensity,
the ground below,
vast, dry, thirsting.

Through a parallel path,
we wait for reprieve,
theirs comes in rain and cloud,
mine through blood and vein.

We both live in cycles,
theirs measured in annum's,
mine being shorter,
just four treacherous weeks.

I've been exchanging emails with a man in a town about 80 miles east of here. He's young (mid-40's), advanced stage, young kids, etc. , a VERY similar prognosis - I just have a two year jump start on him.

Today he sent a few photos of himself and his daughter. She races sprint cars at tracks in mid-Missouri. That is pretty cool. However, I looked at the photos and thought about what he might be going through. It made me cry. Welcome back to the office, welcome back to reality!

On one hand, the pride he must feel in watching her perform is apparent. However, the fear that grips him about PCa, and the future is equally apparent, at this time, perhaps more prevalent?!

A glimpse in the rear view

I'm writing this at 33,000 feet on my mobile phone, returning to Kansas City from a business trip to Philadelphia.

This Saturday is a big day, it marks two and a half years or thirty months post diagnosis! As my friend David likes to say 'that's a big damn deal!!'

Being on a plane and without internet access I am not sure where this places me in relation to the 'average' man diagnosed with metastatic or advanced PCa? Frankley, we never really cared.

From that dreaded day in 2005 in Dr. D's office we have never approached this like my case was average.

Sometimes, like when Lupron/Casodex only worked for less than a year, we were on the wrong side of average. However with my current regemine, we're still seeing results three times longer than average. How does the saying go? 'There are lies, damn lies and then there are statistics? Or something like that......

Each month, each step of this journey has been a learning experience. I have met some absolutely wonderful people. I have grown closer to those around me (both family and friends), closer to God and I have changed, wow have I changed!

Just go re-read entry #1 (February 2, 2005). Not only is my tone different, my attitude, my outlook and more have changed as well. Yes it's true I know so much more about PCa now than I did back then, but I have to honestly admit that I am more positive tonight than I have been
in months.

Cure? I said I was feeling positive not that I was feeling crazy! That being said, at 30 months I'm feeling like 60 months may just be a start......you never know?

Recognition, while appreciated, that's not the point

I received notification the other day that my blog, "the Big C" had won an award. The press release is here.

I appreciate this although it's not really the point. The purpose of this blog is to share my experience in order to keep my family and friends up to date and more importantly, to share my experience, thoughts, and perspectives with someone else that might be going through their own battle with prostate cancer.

There is another movement under way, started by one of the moderators of the discussion boards I monitor, to get Oprah to do a show on prostate cancer. We are trying to send as many requests as possible in order to get the attention of the show's producers. If you want to help, click here and fill out the application. It will only take a few minutes, and who knows, maybe if enough folks submit the idea, it will make a difference!
Posted by Unknown at 8:50 PM 1 comments

No, not the old chuck Berry song.

Today is the day, sixteen years ago that I married my best friend, my one and only, my soul mate.

There are many things she has done for me over the years, far to many to list here. She is always there, by my side with a word of encouragement, a silent squeeze of the hand, a gentle kiss.

I don't even want to imagine a world without her? It would make George Bailey's world look like a children's tale.

And so tonight, we will slip out for dinner for two. Nothing fancy, just a place we enjoy immensely; The Blue Koi.

If history repeats itself, we'll be asleep before midnight, but content and happy as you can only imagine.

Today I am having blood drawn for another PSA test. My appointment with Dr. H is not until Monday, but Mary and I decided to have this done today, so when we meet with Dr. H on Monday we will already know the results.

Yes, I am a little apprehensive.
Posted by Unknown at 8:40 AM 6 comments