Tomorrow I am out of the office for an all day meeting. Then I will be on vacation until January 3rd.

So much time, so little to do.
First and foremost, Merry Christmas to all of you. Enjoy the time with your families. Take real time away from work. Recharge you batteries. Just get away (if not physically, atleast mentally!).
With this post, number 300 in my continuing saga, we turn into a new year. It seems like yesterday, December of 2005, that Mary and I spent the holiday season, all of January and the first half of February stressed out. Stressed as you can only imagine. Those days are long behind us. Not that life is stress free, it's just different. We have accepted the diagnosis of Prostate Cancer. It is what it is.
On the 31st I'll have another blood test, and we'll anxiously await the results and deal with things thereafter. The monthly emotional roller coaster ride begins again. 2008 may bring changes in test results, although things could remain the same, (we pray that they will), however, it is likely to change. I thank God for 2007, it turned out to be one heck of a year.
Prostate Cancer has changed me, the people I have met have changed me. I have gotten to know friends and family members better, that has changed me. Some changes are subtle, others more pronounced and in some ways remarkable. Funny how that works.
So in closing, find the time to light a fire, snuggle up with your loved ones, turn on "It's a Wonderful Life" and cry like I always do when ZuZu says "Look Daddy, teachers says every time a bell rings an angel gets their wings!"
That's right, that's right.
Posted by Unknown at 4:19 PM 1 comments

Dan Fogelberg, a popular singer/songwriter of the '70s and '80s, died Sunday, at home in Maine at the age 56. He had battled advanced prostate cancer since being diagnosed in 2004.

I was never a huge fan, although I did like most of his music. My favorite song was his most popular, "Leader of the Band", which was a a tribute to his father.

"Leader Of The Band" - Dan Fogelberg
An only child alone and wild, a cabinet-maker's son
His hands were meant for different work and his heart was known to none
He left his home and went his lone and solitary way
He gave to me a gift I know I never can repay

A quiet man of music, denied a simpler fate
He tried to be a soldier once, but his music wouldn't wait
He earned his love through discipline, a thund'ring velvet hand
His gentle means of sculpting souls took me years to understand

My brother's lives were different, for they heard another call
One went to Chicago, another to St. Paul
And I'm in Colorado when I'm not in some motel
Living out this life I chose and have come to know so well

It has been over 30 years since grade school, when I sang that song.I am not sure what brought it to mind?

Perhaps it was our weekly game of disc golf yesterday?
22 degrees, 2 inches of snow on the ground and more falling as we played. It was a beautiful morning. The five of us, pretty much the nucleus of the Saturday morning gang, tromped and sloshed our way through the woods. I may have mentioned it here before, but if you've never been in the woods during a snow fall, I highly recommend that find an opportunity to do so. I can't explain it, but it is truly a beautiful experience.

The rest of weekend was filled with a basketball game, a Christmas party, addressing Christmas cards, wrapping presents and getting ready for the holiday week. Tis the season!
Posted by Unknown at 1:16 PM 0 comments

The family and I watched a wonderful TV movie last night, "Pictures of Hollis Woods", a Hallmark Hall of Fame production. For as many times as I complain about the garbage on TV, this was a beautiful story. There is nothing that can be compared to lounging on the sofa and crying with your family (the good kind of crying). It's available on DVD, I'd recommend it to all.

I spent last week at a training class in Atlanta. It was without doubt, the best training class I have ever participated in. I left with a different perspective on communication, body language and getting a message across to a group. I could go on and on, but will just end it there.

However, on my way to Atlanta, my mind was obviously in a far different place as reflected in this poem. Please don't read anything into this - I'm fine, feeling fine, looking marvelous (a joke, a Billy Crystal reference)....

What if your life changed,
things you loved,
and perhaps at times,
took for granted,
suddenly meant nothing?

What if just living,
breathing, getting through
another grey day, was
as much as you could,
find strength for?

What if the sun set,
on everything you knew,
and cherished,
Only to rise the next day,
without color,
without the brilliance or colors of God?

A life of cloud covered sky's,
one without color,
without the beauty you
had come to accept as truth,
What if your eyes only saw black, white and grey?
Posted by Unknown at 3:05 PM 0 comments 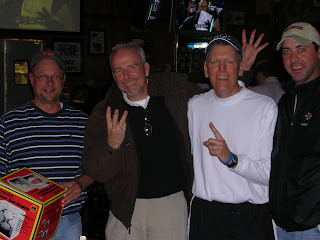 There are a number of reasons for the title of today's blog. The last 24 hours have been, as I've described in the past, that part of my journey, my roller coaster ride, that I can reflect on and enjoy. I'm on an 'up'!!

First and most importantly my PSA number this month: 21.9

I'm trying to type and pray at the same time! Thank You God for giving me good news as we approach Christmas. I was not sure how Mary and I would have dealt with bad news hanging over our heads during the holidays? Obviously, we would like the number to be much lower, but at least it is not doubling, tripling, etc. As Dr. H would say, the change is statistically insignificant, which equates to a stable condition. I am grateful that I continue to feel good and that we don't have to worry about it this year!!

Another reason is last night we held another Texas Hold 'em Poker event. We had a great time as you can see from the picture. Kyle (right) took home the first place prize, Bruce (far left) was second and my long time friend Steve took third. Due to the success of the event we will be making another $1,000 donation to the Prostate Cancer Foundation. It will be matched for a total of $2,000!! A large thank you goes out to everyone who played and contributed to the night's success!

Finally, I add this note with a bit of trepidation, however I feel I need to include the information. There is a wonderful, very spiritual woman at our Church that is facing her own cancer battle right now. She will start chemo soon and I would like to ask you to say a prayer for her, as she fights this devil, cancer.

I saw her and briefly spoke with her Saturday after Mass. The emotion and the fear were painted across her face. Mary and I know that fear all too well. I tried to be encouraging, I could only tell her she was in my prayers. I hope that somehow, my words comforted her. Once again....it's not about me. Damn this cancer!

So, as she continues her battle, I include and recite this prayer for her:

We are off to see the doctor in a few minutes.
I am slightly apprehensive after last month's slight bump in my PSA.

It's the holiday season, I want and pray for a good number. I'm not being greedy here, not expecting or asking for my number to drop by 50%, just would like it to come in a little lower than last month. Something to indicate that the cancer has not started down the path that will lead us to our next treatment regime....likely chemo.

Also, just to add a little fuel to the fire and give some of you insight into what those of us with Advanced Prostate Cancer deal with, yet another clinical trial to treat Advanced PCa has been pulled. This one just happened to be the trial we were most interested in, both because it was available here in Kansas City and because of the nature of the trial. It turns out the incident of heart attack for trial patients was higher than anticipated. We are a little disappointed, but then again, we aren't there yet anyway. It's a bit disheartening as there are such limited treatment options for this stage of the disease.

Mary and I did spend the weekend decorating the house. I do love Christmas. The outside lights, trees and many many other decorations are scattered throughout the house. It kind of makes it easy to forget about cancer. At lease for a few minutes here and there.
Posted by Unknown at 9:10 AM 0 comments